“Everything we ate was what we grew!”

We Grow in the Mud 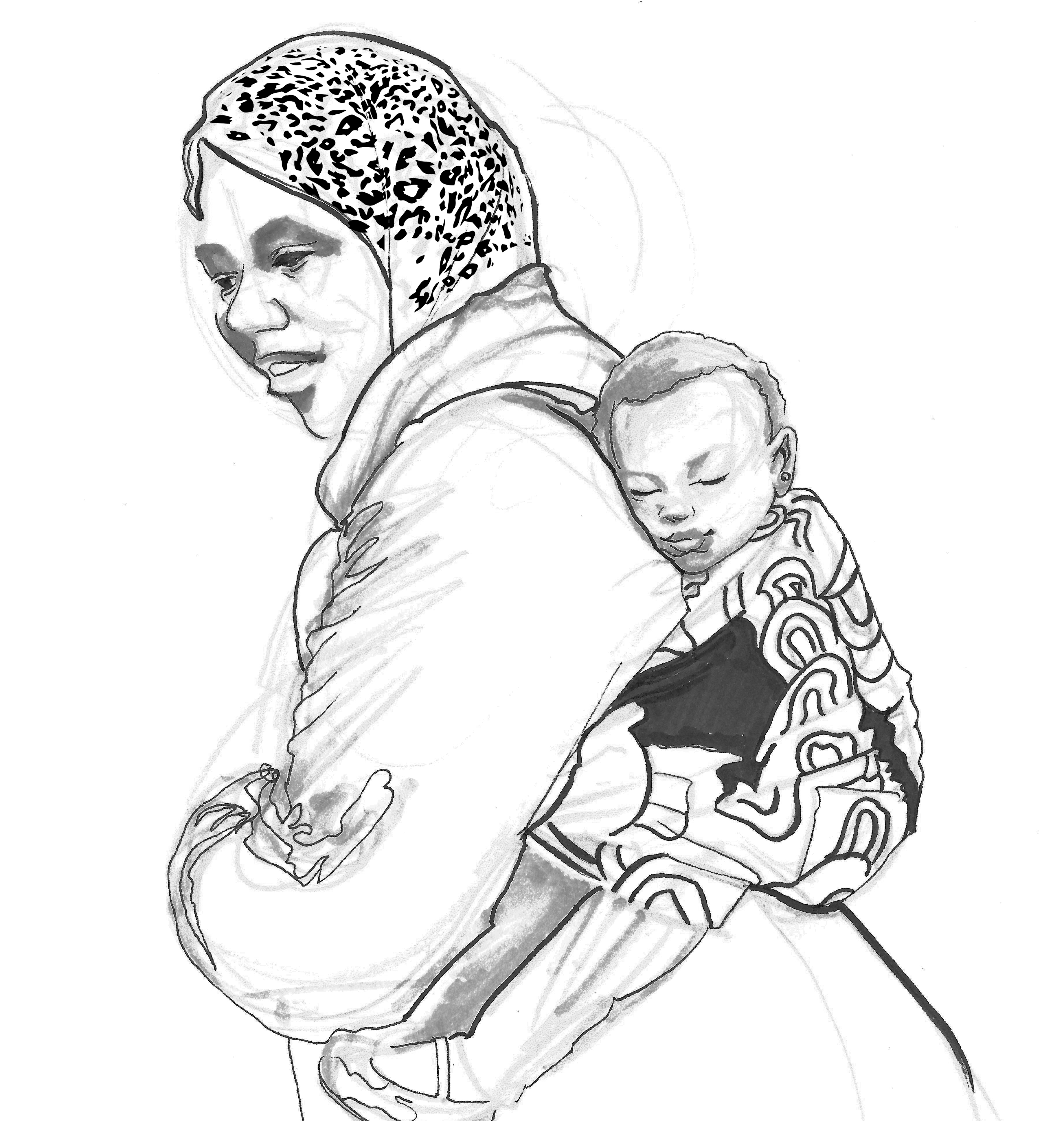 It’s just starting to drizzle as Beatrice Shimirama lifts her daughter Howa out of the Prius and onto her back, cinching fabric to hold her in place. The little girl’s eyes grow wide as almonds and then narrow as she snuggles down away from the rain, already falling asleep. Beatrice stands and flips another cloth back over her head and over Howa, then starts walking down the path toward her plot in Horse Neck Farm.

On the outskirts of Kent, Washington, surrounded on three sides by an oxbow of the Green River, the farm is mostly resting in late fall, a glimmer of what it must have been a few months ago. This is a good place to grow things, a legacy from before dams kept the river from flooding the flatlands and replenishing nutrients in the soil. Organizations like the International Rescue Committee and Living Well Kent provide access to land, owned by King County, and remove barriers to farming for farmers of color and immigrants. In Beatrice’s plot, Red and green chard hangs on with some leggy collards and kale. Next to her plot, a Congolese man farms ⅛ acre, and next to that a farmer from Nepal works ¼ acre. Berniece points to the place where tomatoes grew during the summer, and then to where her green beans were, and black-eyed peas, beets, eggplant, mustard, zucchini, summer squash. At the edge of the plot are rows of dried corn stalks.

“I wasn’t sure what kind of sweet corn to plant, so since I’m African, I planted African corn,” she says. “It’s harder and not as sweet.”

What do people do with it, I ask?

I first met Beatrice at the South Delridge Farmer’s Market as I bought bunches of kale and chard from her. A couple of tables over, sisters Adameh Jammeh and Oumie Sallah sold Senegambian food--jollof rice, chicken cooked in onions with their own blend of fiery sauce, and sweet, pink-red hibiscus drink. They insist they cook exactly like they learned from their mother in Gambia. They’re not interested in fusion with anything. Authenticity is the selling point of their catering business out of Spice Bridge, a food business incubator of the Food Innovation Network in Tukwila. Under other pop-ups there’s sweet potato pie and cookies and lime popsicles. Kids play tag, dodging and weaving among the shoppers until someone tells them to cool it. Families are lining up for COVID shots. After a stormy, blustery night, everyone’s amazed it’s not raining and that the pop-ups aren’t blowing away.

During the summer of 2021, the South Delridge Farmers Market ran one Saturday each month, a pilot project sponsored by African Community Housing & Development. From the start, they knew they had to do things differently from typical farmers markets if they wanted to become a hub of community resilience. In an area of Seattle that’s challenged by access to good food, they wanted to focus culturally relevant food for immigrant communities from Africa and Asia. “Success,” says Rachel Perlot of ACHD, “means getting a ton of food into people’s hands.”

To do that, they created a welcoming space both for BIPOC vendors and for people from the community by locating the market at Hope Academy, a nonprofit school started by East Africans. With funding from King County and the Albertson’s Foundation, ACHD was able to provide tents and tables to encourage farmers to take a risk on a new venue. Word-of-mouth advertising in the languages of the community resulted in vendors who spoke fifteen different languages. Bags of food were pre-packed and available to anyone to take away any stigma of poverty or need. Kids got market money they could use to buy treats. At the end of market days, ACHD bought leftover produce from vendors at full price. The point was to operate from a space of abundance.

To someone like Beatrice, in her first year as a production farmer helped by her husband and mother-in-law, being able to predict income from the market was exciting. Plans to expand the market to two days each month next summer energize her dream of farming full time and being able to give up her “regular” job--one she likes--as a Microsoft shuttle driver.

Other farms at the market are more established, and their existence made the idea of the South Delridge Farmer’s Market possible even as the market pulled them together into a space of collective community wealth: Small Axe Farm, a Black farmers collective with a four-acre teaching farm that supports new BIPOC farmers; Sariwa Farm, focusing on Filipino veggies; City Fruit, a group reclaiming the urban orchard of Seattle.

Beatrice bends to pick a few leaves of chard then hitches up the sling holding her daughter. She gestures toward some dry stalks of amaranth, the fuzzy blooms and seed pods brown but still standing. “In Burundi we use the leaves, so I just sell that,” she says. “Africans, Asians, and people from Jamaica like it. They use it like spinach.”

The more Beatrice describes her work, the more it becomes clear that her customers’ food preferences inform her farm practice. “Last summer, I grew just a little bit of water spinach,” she says, referring to a plant common to South Asia. “People fought over it, so next year I know to plant more. And Kenyan and Ethiopian people only want the white chard. I don’t know why and I tell them it’s the same as red, but they only want the white, so I make sure to have some.” She tells me how Kenyans like pea leaves and how people from Burundi and other places eat pumpkin leaves.

Howa has been sleeping in a sling on her mother’s back for an hour, and now she stirs, peeks out into the drizzle, then pulls the cloth back over her head.

Asked where she learned farm, Beatrice says that growing up in Burundi, the only food items they bought were oil and salt. “Everything we ate was what we grew!” She tells about her mother and family in Burundi, about how they think she’s too busy now. She gestures toward Howa, a girl already learning from her mother what it takes to grow things, to nurture the soil so that it returns to us what a community needs to thrive. “Like her, we grow in the mud. Farming is everything!”

The Carrot Cake Queen of Spokane

Writer Kate Lebo profiles Alison Collins, proprietor of Boots Bakery & Lounge in Spokane. Boots Bakery has long been a LGBTQ+ friendly place, and one of the first vegan/gluten eateries in town.

A mini-documentary on Nancy Chang, a practitioner of Taiwanese and American foodways.

Moyo Kitchen: Cooking from the Heart

Have a Donut...You're Going to Be Fine

Interview with Hong Chhuor of King Donuts in Seattle

A chicken soup recipe from the Hmong Association of Washington cookbook.

Introduction to the Spring 2022: Foodways Issue