The Carrot Cake Queen of Spokane

Writer Kate Lebo profiles Alison Collins, proprietor of Boots Bakery & Lounge in Spokane. Boots Bakery has long been a LGBTQ+ friendly place, and one of the first vegan/gluten eateries in town. 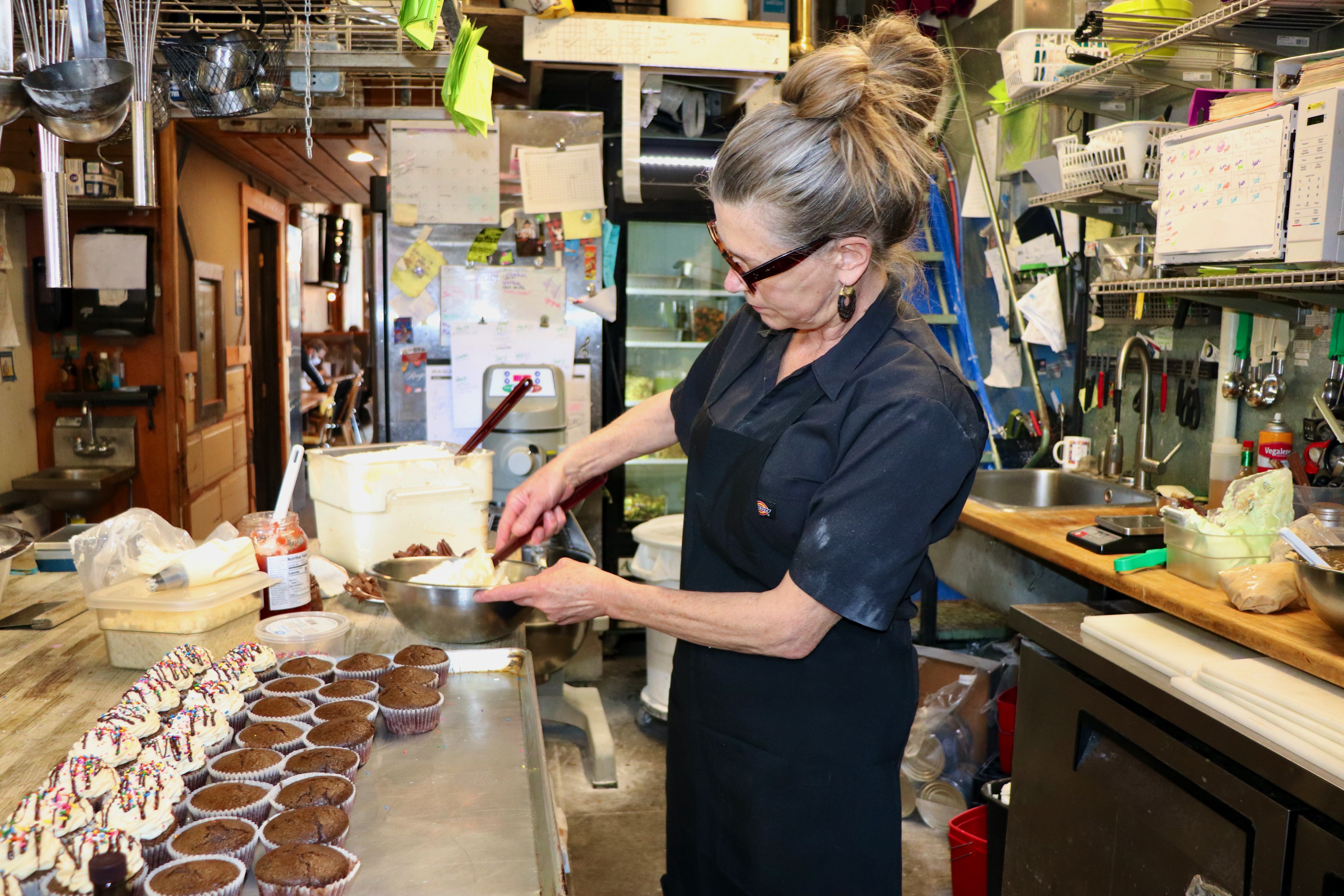 Alison Collins’s carrot cake weighs 9 pounds, 10 ounces. I’d assumed it weighed at least 50 pounds, but the scale says no. Still—when I carry the cake from Boots Bakery to my car, I can carry nothing else. There are reasons for this weight that I can tell you in baking terms. It’s a vegan, but not gluten-free cake, with a fudgy, moist texture that, in lesser treats, could only be achieved by underbaking. You need a lot of wet ingredients to bind and structure a vegan cake, Alison says; in this one, she uses pumpkin, pineapple, canola oil, and egg replacer. Each layer is braced by lemon-maple frosting, then sprinkled with coconut and candied pepitas you’ll find yourself dusting from your lap after eating your slice too fast. But knowing the composition of Alison’s carrot cake doesn’t describe its true heft. This is the only cake at Boots that isn’t gluten free (“That cake cannot be gluten free,” Alison says. “It’s too heavy.”). This is the cake you’ll still find on the dessert menu at Mizuna, Spokane’s original vegetarian-friendly restaurant, where Alison used to bartend and bake, and, in 2003 or ’04 invented the treat that’s been a top seller for Mizuna and Boots for nearly 20 years. This is the cake that people bought, at first, because it was the only vegan cake in town, the cake they continue to buy for any occasion or no occasion, whether they are vegan or not, because it is so delicious. This is the cake I served at my wedding, the cake Alison can’t stop making, even though she wants to, because it would make her customers so sad.

You can’t tell that it’s vegan. I don’t write this as a compliment, just as a fact. It is not a health cake. No carrot cake ever really is. “A housewife’s treat,” Cook’s Illustrated calls it in my edition of their New Best Recipe, a dismissal of carrot cakes and housewives that made me stop reading Cook’s Illustrated altogether. Nor is the rest of Alison’s food supposed to be quote-unquote “health food,” though it is healthy, and it does accommodate people with a range of dietary restrictions.

Alison never intended to own a vegan and nearly gluten-free restaurant. The original plan was to make pastries and a couple vegan dishes—whatever the liquor board required so that Boots could sling cocktails. But when they opened in 2012, if you wanted vegan or gluten free fare in Spokane, Boots was the only game in town. “Right away the food was huge,” Alison says. “We had to pivot very quickly to amp up production. Then I got nervous that people were going to get confused. You can’t serve cous cous right next to millet. What if someone gets the wrong salad?” Today, everything in the deli case is vegan and gluten free—except for the carrot cupcakes—so that anyone who avoids animal products or gluten can feel safe about what they’re eating.

This change was inspired by demand, but it’s also rooted in Alison’s commitment to being a good host. Hers is a Thanksgiving table where anyone who doesn’t have a place to go is invited. Boots is an extension of that openness and sense of family. You can see this in the diversity of their clientele. “Some businesses, you can get an idea of the people who go there,” she says. “Here it’s everybody. We have politicians having meetings in the morning. We have poetry slams. We have sweet old ladies who can’t eat wheat. A big LGBTQ community comes here because they feel safe and comfortable.”

That’s been true from the beginning. The same year Boots opened, voters were considering Referendum 74, the bill that legalized same-sex marriage in Washington State. Alison used Boots’ business voice to loudly proclaim support, and she hosted phone banks to help get out the vote. “I wanted people to know right away that everyone is welcome here,” she says. “If you aren’t down with that, that’s okay, you can still come here, but you need to know that that’s where we’re at.” Fifty five percent of Spokane County voters cast their ballots against equal marriage. Statewide—and within the city of Spokane—the referendum passed.

During recent COVID lockdowns, Boots struck a similar balance with the culture war over masks. You had to wear one inside, but if you didn’t want to wear one, no problem. They’d bring your takeout to you outside. No flouting mask mandates, and no fighting. Well—some fighting. When Boots required proof of vaccination to dine-in, there was backlash enough for KHQ television news to cover it. Alison’s response was characteristically sympathetic to all sides while clearly stating her own position. She said, “I knew there would be backlash, and people who didn't appreciate it, I get it. I understand it, and to those people—I hear you, and I support your decision. This is our decision." Boots is now, in April 2022, back open for regular business. They encourage mask-wearing and being vaccinated, but they no longer require it to come inside.

If you’ve never been to Boots or recently visited Spokane, let me explain something: it’s not that there aren’t other funky spots in the city, or places people are generally guaranteed to run into people they like, or restaurants that serve vegan/gluten-free food. It’s that Boots has, from the beginning, made welcoming all people—queer or not queer, vegan or not vegan, cool or uncool, shy or outgoing, young or old—a priority, and in so doing, they’ve created a culture that feels familial, yet respectful of everyone’s privacy. Customers experience this the moment they arrive. The front door is in the center of a wall of ceiling-to-floor southern-facing windows, so when you walk in, you have to blink for a second and let your eyes adjust. From there you can see the front deli case and all the way to the back of the cafe, where the kitchen is. The person behind the counter, Mark or Polina or Rob or any one of Alison’s many longtime employees, will greet you if they know you. If they don’t know you, they’ll ask if this is your first time in. I’ve heard them do this. They won’t rush you while you decide what to eat. They won’t interrogate you about your plans for the weekend. While you wait in line, you’ll probably see someone you know. At the very least you’ll see Dan Spaulding, who owns the building, sitting at a booth as if it were his living room.

As I try to describe how being at Boots feels, and how eating Alison’s carrot cake feels, I keep lapsing into the language of nostalgia, something fuzzy and rose-colored. I’m trying to resist that urge. Charles D’Ambrosio writes that nostalgia is where pain goes to rest, and what I’m trying to describe isn’t about pain. Or—maybe it is. Boots is a shelter from a certain kind of pain, a specific kind of fear and uncertainty: Will the food make me sick? Will my identity be welcome? Do I have a place in my community? Do people know my name, at least, and care that I exist? Or even better—will they be my friend? Is there any carrot cake left?

Alison wants to stop making her legendary cake because it’s the only gluten-full recipe at Boots. Having it in the kitchen makes her nervous about cross-contamination, or that someone with a gluten allergy will accidentally order it and make themselves sick. It’s baker Jessica Devore’s job to make the cake. She does this early in the morning, when no one else is around and no other food is being prepared. She stores her all-purpose wheat flour in a 5-gallon sealed container with a skull and crossbones on the lid. Before mixing her batter, she removes whisks and spoons from the overhead rack so floating flour cannot contaminate them. The cake has its own mixer, its own pans. When cleaning up, she bleaches everything and cleans every crevice. Jessica herself can’t have gluten; when she protects customers from wheat flour, she’s protecting herself, too. “That’s how I know she’s fastidious about it,” Alison says. Jessica says she doesn’t mind that she can’t eat the cake. She’s glad other people enjoy it.

This generosity toward difference, to allowing wheat in what could be a gluten-free space and taking the extra steps to make sure these two cuisines—and the people who eat them—can coexist, is at the core of Boots. Alison invented the cake so Spokane vegans would have a worthy dessert. She keeps making it, despite how it complicates her kitchen, because her community loves it so much. This is why the carrot cake is so good. This is why it continues to exist at all.

To try this cake, order ahead. Since COVID, Boots has stopped making carrot cupcakes, which means the deli case is now truly gluten free. It will arrive in a large brown box and feel heavier than it really is. Serve it to a party, or freeze and wrap slices to hoard at home. It gets even better after being frozen and defrosted. Share your carrot cake if you want to. You don’t have to want to. I think Alison would approve of that too.

*This work was completed thanks to the gracious support of the National Endowment for the Arts.

A mini-documentary on Nancy Chang, a practitioner of Taiwanese and American foodways.

We Grow in the Mud

Moyo Kitchen: Cooking from the Heart

Have a Donut...You're Going to Be Fine

Interview with Hong Chhuor of King Donuts in Seattle

A chicken soup recipe from the Hmong Association of Washington cookbook.

Introduction to the Spring 2022: Foodways Issue